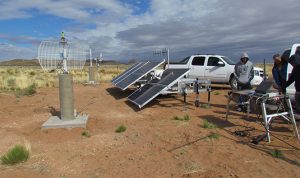 A critical capability to predict for GNSS chips and receivers —and for devices using alternative or back-up PNT technologies — is how they will actually perform without GPS.

Filling this need, the U.S. Air Force 746th Test Squadron has declared Initial Operational Capability (IOC) for its new truth reference, the Ultra High-Accuracy Reference System (UHARS) at the White Sands Missile Range in New Mexico. Even when GPS — or any other GNSS system — is being completely jammed, UHARS provides extremely accurate positioning, navigation and time (PNT) over the large area that the system was designed to cover.

“Initial testing shows that UHARS delivers accurate independent PNT as good as, or better than, the Air Force’s current Central Inertial and GPS Test Facility Reference System, so it is perfectly able to support current customer requirements,” said Jim Brewer, chief scientist of the 746th Test Squadron. “However, more data are required to tune the UHARS filter and optimize its accuracy to meet even tighter PNT requirements, which is our objective. When this is achieved, UHARS will deliver truth accuracy for next-generation military capabilities, and we will declare UHARS Full Operational Capability.”

“UHARS is a rack-mounted, tightly integrated system of improved navigation sensors, a data acquisition system and a new post-mission Kalman filter, all of which need to work together,” said John Cao, technical director of the 746th. “It’s working very well, but once we completely measure and characterize the individual components and then tune and validate the filter, the complete system will provide a significantly more accurate reference solution for future airborne and land-based test vehicles in navigation warfare environments where modernized and legacy GPS signals are jammed from friendly or hostile systems.”

The NGBPS subsystem of the UHARS program employs a network of ground-based LocataLite transceivers and test vehicle receivers manufactured by the Locata Corporation. The Locata network delivers centimeter-level positioning and navigation as well as nanosecond-level synchronization, which may be useful for military applications requiring precise time transfer in GPS-denied environments.

White Sands is a U.S. Army rocket range of almost 3,200 square miles in parts of five counties in southern New Mexico. It is the largest military installation in the U.S.

The LocataNet truth reference system can also provide a 2D solution to support ground-vehicle testing. Reportedly, the 2D solution, while also very good, has not yet been fully characterized. Once the filter has been fully tuned in this respect, White Sands could serve as a test facility for autonomous driving. It has many miles of paved highway, possibly in the hundreds of miles.

The importance and uniqueness of White Sands as GPS test facility springs from the fact that it is illegal to jam GPS elsewhere without a special permit, making it extremely difficult to create a real-world test scenario to see how GPS and other PNT devices perform under denied or restricted circumstances. This is of critical importance for flight testing (UAVs and other avionics) for which the UHARS was primarily designed and optimized.

NovAtel raises deep concerns about the testing methodology used and conclusions presented by Ligado regarding the impact of its proposed usage of L-band frequencies for a terrestrial wireless network.

The study shows a lack of understanding of the uses of the GPS by assuming that all applications require the same positioning accuracy, NovAtel said.

The filing also raises a number of concerns about the potential harmful interference impact on GPS receiver performance. NovAtel is particularly concerned that Ligado has moved away from what it understood to be an agreed-upon standard that interference tolerance should be limited to a received interference signal power level that causes no more than 1-dB degradation in the received C/N0 level.

NovAtel disagrees with the conclusion in the RAA Study that there is no meaningful correlation between a 1-dB change and GPS performance. NovAtel submits any interference must not exceed 1-dB degradation in received C/N0 if robust, precise positioning is to be maintained. Ligado has not yet proven that its use of the spectrum will not be detrimental to high-precision GNSS users, which is what the 1-dB C/N0 degradation metric ensures.

“To date, Ligado has not proven that its use of the proposed spectrum can be made compatible with high-precision GNSS,” NovAtel said in a press release. “The interference impact on the other GNSS constellations such as Galileo, GLONASS and BeiDou has not been addressed. These constellations are increasingly used in combination with GPS for many high-precision applications. Proposed, unverified mitigation methods such as narrowband antennas are presented in the Ligado filing without explanation of who will be responsible for the cost of such design modifications and retrofit programs.”

Europe’s 13th and 14th Galileo satellites lifted off at 08:48 GMT from Europe’s Spaceport in French Guiana atop a Soyuz launcher. (Photo: ESA)

The Galileo constellation system now has 14 satellites in orbit after a May 24 double launch. Birds 13 and 14 lifted off together at 08:48 GMT (10:48 CEST, 05:48 local time) atop a Soyuz rocket from French Guiana. The twin Galileos were deployed into orbit close to 23,522 km altitude, inclined 57.394 degrees to the equator, 3 hours and 48 minutes after liftoff. Following days saw a careful sequence of orbital fine-tuning to bring them to their final working orbit, followed by a testing phase so that they can join the working constellation later this year.

The Marconi Society awarded its 2016 Marconi Prize to Bradford Parkinson. The annual prize recognizes major advances in information and communication science that benefit humanity: in this case, the difficult yet ultimately successful development of GPS. See gpsworld.com/marconi for details and a brief history.