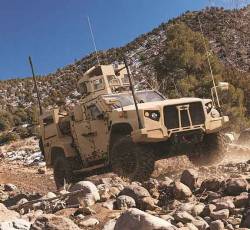 After going through rigorous qualification testing and thorough vetting, GPS Networking was approved to supply company products for the JLTV.  During the contract, which includes both low rate initial production (LRIP) and full rate production (FRP) phases, Oshkosh expects to deliver approximately 17,000 vehicles and sustainment services.

In recent conflicts, U.S. and allied troops have faced new, unconventional threats such as improvised explosive devices (IEDs) and other weapons, creating a critical need for lightweight, mobile, and protected vehicles — hence, the JLTV program.

The Oshkosh JLTV uses parts and services from more than 350 suppliers in over 30 states. Oshkosh says that without its supplier network, the company would not have been successful in meeting all the vehicle performance and delivery requirements leading up to the end of the current acquisition phase.

GPS Networking says that it “looks forward to a successful relationship with Oshkosh Defense that will continue to grow and develop through the years.”

Established in 1999 and headquartered in Pueblo West, GPS Networking supplies products for GPS signal distribution and acquisition. Its sole owner and CEO, Steven  Waite, has been involved in the GPS industry since 1990, invented the GPS Re-radiating Kit in the early 1990s and has developed a line of products that simplifies networking the GPS signal building block. The company’s products are available with military certification to Military Standard 810F, EMI Certified, and have CE approval.