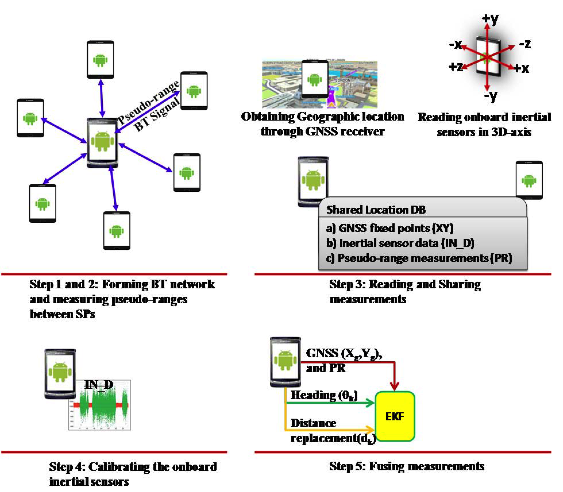 Navigation progress for indoors and UAVs

I didn’t get to this year’s IEEE/ION PLANS meeting in Savannah in April, but I did find a few papers that interested me. You might have read past articles of mine that looked at the challenges of indoor navigation. And, of course, unmanned vehicles technology also is one of my favorites.

So, I was pleased to find papers that addressed a few key issues for me:

Indoor navigation is an area which is seeing quite intense research, and several companies have now put initial products on the market. The general approach has been to use sensors within smartphones combined with radio-frequency (RF) signals which seem to be readily available in stores and malls which indoor location is finding commercial applications.

If a position can be generated by an internal GNSS receiver within the phone in an outdoor setting prior to entering a building, the trick is to carry that position forward as GNSS signals disappear when the user moves away from the entry area. Inertial sensors in the phone are usually not accurate enough to do this job on their own, so ranging using RF from Bluetooth and Wi-Fi transmitters/beacons may be integrated to provide a position solution. Magnetic sensors in the phone have also been used to detect fixed metal structures within a building and use this data to aid location determination.

The problem is that you need an up-to-date database of where the Wi-Fi and Bluetooth are located, and it has been taking a lot of work to map or “fingerprint” the interiors of buildings — and guess what, these “beacons” often are moved after a mall or store is mapped, so RF ranging can become quite inaccurate.

So, fearless investigators from the University of Buckingham and University of Northampton in the U.K. have come up with the concept of using ranging between cooperative smartphones to aid each other and achieve location accuracies of 5-10 meters.

While outdoors with good GNSS position, the inertial sensors in each phone are calibrated, each phone gets position using its internal GPS and a network is formed between the phones using their relative positions. Then when a phone goes inside the building, step counting is used to maintain relative positioning in the network. This can result in around 3 meters positioning for the interior phone.

Well, yes, not everyone has two other buddies waiting around so one guy can go in and find the classic comic store, but for applications such as firefighters, urgent/health care, and security/police, this approach might work well.

Another paper looked hard at the options there might be to resolve problems with GPS performance which has previously precluded running RTK on smartphones. If we could achieve centimeter positioning on a mass-market basis, many current applications which are inhibited by cost, could become possible and revolutionize even the way we live. People have already used external solutions to solve some of the problems, but leading researchers at Texas U, with Broadcom and Radiosense support, may have come up with a self-contained solution.

It is known that there are issues with the capability of the GNSS chip and oscillator components in smartphones — the observables they produce are not currently of sufficient quality to sustain RTK performance. So these researchers worked with Broadcom, who supplied them with an Android smartphone, which provided access to raw code and carrier-phase outputs and was also able to process these measurements internally.

A smartphone’s Android software stack with the GNSS components
and data flow highlighted.

Carrier phase measurements in smartphones suffer from five anomalies not found in survey-grade GNSS receivers — but four of these can be fixed in post-processing. The remaining phase measurement error increases with time and precludes RTK centimeter-level positioning — it could be the result of round-off error due to processing limitations. Otherwise it seems possible that carrier-phase differential GNSS positioning might be achievable.

However, the researchers also studied antenna performance and found that its gain pattern was significantly affected by strong local multipath. The impact is that deep, unpredictable fading and large phase error will compromise centimeter-accurate positioning.

So we’re not quite there yet, but with a new smartphone version showing up almost every other year, it is always possible that researchers and manufacturers will eventually evolve designs in the right direction, and ultimately solve the problem.

Meanwhile, researchers at West Virginia University have been investigating methods to maintain relative positioning between UAVs in flight. With drone “swarms” and cooperative drone missions becoming more common, if a simple method could be derived to maintain relative separation, these applications could become more prevalent, especially in a GPS denied environment.

So with only noisy ranging radios between UAVs, and an onboard navigation system solution on each vehicle, the researchers set about developing an algorithm which can maintain relative position. The solution is complicated by the geometry between the UAVs, how often range measurements are made, and the noise in those measurements. To constrain these variables, the study was run assuming the UAVs travel at the same altitude.

The study concluded that provided the UAVs travel in the same direction, parallel to each other, that their algorithm could find a solution all the time. The focus of the study appears to be on determining hearing and relative bearing between the vehicles and results were varied depending on the frequency of range measurements, the amount of noise and the geometry. So a few steps forward along the path towards making drones work together in a hostile environment where GPS is jammed.

Another study on the same problem of maintaining relative position between drones was also undertaken by West Virginia University, Systems & Technology Research and the Air Force Research Laboratory. However, their solution didn’t only use ranging between vehicles. It took advantage of inertial measurements on each drone, computer vision calculations derived from downwards looking cameras on both UAVs, and finally magnetometer measurements were also added into a Kalman filter solution.

With several additional sensor measurements, the researchers were able to predict that relative positioning could be maintained in a GPS denied environment. They also considered ranging radio, magnetometer and vision update rates, and the performance/update rate of various quality inertial sensors. The principle objective is to enable accurate target hand-off between drones as one approaches the other. Overall, they found their model could support 10-meter-level position and 0.5 degree accuracy.

Finally, for safe operation of UAVs in the US National Airspace System (NAS), minimum Detect and Avoid (DAA) standards for small to medium size UAVs are being developed for operations within drone-accessible airspace. DAA has to provide the “see and avoid” for unmanned aircraft systems (UAS) that pilots of manned aircraft use to avoid other aircraft. So surveillance sensor information needs to supply the UAV and the remote Pilot in Command (PIC) operator with the situational awareness needed to remain “well-clear” of other aircraft. Part of what DAA should provide are alerts working to universal standards for all UAS.

The research presented by CAL Analytics and General Atomics (with technical support and guidance by RTCA committee SC-228 and NASA) outlined the evaluation alerts generated when other aircraft are anticipated to penetrate into a “well-clear” volume around a UAV. Alerts can be “missed,” “late” and “early” – all of which can impair DAA performance and safety and which need to characterized and mitigated. Sensors currently under consideration for use in DAA include Automatic Dependent Surveillance Broadcast (ADS-B), active surveillance transponder, and airborne radar – this study looked at ADS-B and radar and the trade-off that they provide related to desirable and undesirable alerts.This analysis will likely feed into the development of UAS DAA alerting standards and requirements.

Highly reliable, proven DAA systems are likely an essential part of the safety system for UAS if they are to become a regular part of operations in the NAS. General Atomics has tested a DAA system including GA’s Due Regard Radar (DRR) aboard a U.S. Customs and Border Protection (CBP) Guardian Unmanned Aircraft System (UAS), a maritime variant of the Predator B UAV. The DAA system also includes Honeywell’s Traffic Alert and Collision Avoidance System (TCAS) and Sensor Tracker, specifically designed for DAA.

And, also in December of  last year, a Schiebel Camcopter S-100 flew demonstration flights with an NLR-developed AirScout Detect and Avoid System. Two helicopters flew “intruder” profiles against the UAV during the demonstration. The Camcopter S-100 flew several scenarios and “unexpectedly” encountered an intruder aircraft. The system determined in real time the corrective action to maintain separation from the intruder aircraft.

So, progress on indoor navigation, research towards running RTK on smartphones, relative positioning between UAVs, and advances in Detect and Avoid solutions for UAVs. Something of a mixed bag, but all promise further progress around different solutions for a number of market navigation segments.