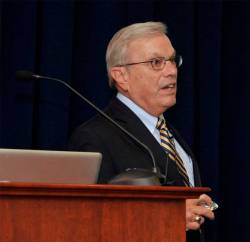 Bradford Parkinson, the original manager of the NAVSTAR GPS development program and a Stanford professor emeritus of aeronautics and astronautics, will receive the 2016 Marconi Prize at a November 2 banquet and award ceremony during the Stanford PNT Symposium. The $100,000 prize, given annually, recognizes major advances in the field that benefit humanity.

“Parkinson’s contributions to the development of GPS helped create a vast global utility that provides positioning, navigation, and timing (PNT) information to the world and is a vital part of today’s global information infrastructure,” the Marconi Society wrote in a press release announcing the award.

This is far from the first honor for Parkinson’s contribution to GNSS engineering, policy, and practice. In 2003 he shared the Draper Prize with Ivan A. Getting for his contributions to development of the Global Positioning System. In 2004 he was inducted into the National Inventors Hall of Fame. In 2013 Parkinson received the Technology Prize of Germany’s Eduard-Rhein-Foundation and, along with other “GPS Originators,” the Goddard Trophy in March 2012, awarded annually to the individual or group who has had the greatest impact on space activities.

Recipients of the Marconi Prize are designated Marconi Fellows and expected to pursue further creative work that will add to the understanding and development of communications technology. The Marconi Prize includes the honorarium and a work of sculpture. Previous recipients include Sir Tim Berners-Lee, an inventor of the World Wide Web; Sergey Brin, co-founder of Google, Inc.; and the late Arthur C. Clarke, writer of science fiction, including 2001: A Space Odyssey.

Vinton Cerf, the 1996 recipient of the Marconi Prize and a co-designer of the Internet protocol suite TCP/IP for the Department of Defense, will speak at this year’s PNT Symposium on the subject, “Benefit from a new Suite of Internet Protocols.”

As Marconi Society Vice Chairman Cerf noted about this year’s award, “Today, there are billions of GPS receivers in the world. GPS is one of the most under-rated advances in the history of information science. It’s taken for granted, but Parkinson was on the ground floor of enabling air, space and terrestrial guidance and navigation with GPS. . . . Dr. Parkinson’s achievements have been game-changing.”

The Marconi Society was established in 1974 through an endowment set up by Gioia Marconi Braga, daughter of Guglielmo Marconi, the Nobel laureate who invented radio (wireless telegraphy). Parkinson is a member of the Inside GNSS editorial advisory council.