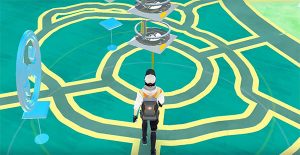 Nintendo has launched a beta test of a new Pokémon game that takes place in the real world. The beta testing began July 6.

Using Pokémon GO, gamers travel between the real world and the virtual world of Pokémon with iPhone and Android devices.

Pokémon GO is built on Niantic’s Real World Gaming Platform for augmented reality. It uses GPS to encourage players to search far and wide in the real world to discover Pokémon. The game allows players to find and catch more than a hundred species of Pokémon as they explore their surroundings.

Players are represented on an augmented reality map of the real world.

Moving around, the smartphone vibrates when near a Pokémon. When players encounter a Pokémon, they take aim on their smartphone’s touchscreen and throw a Poké Ball to catch it. the player is indicated on a map showing their actual location.

The game encourages users to explore the cities and towns where they live to capture as many Pokémon as they can. Also, PokéStops are located at interesting places, such as public art installations, historical markers and monuments, where players can collect more Poké Balls and other items.

Players can also join teams, and “battle” with their captured Pokémon at “gyms” that can be found at real-world locations.

The Pokémon GO Plus wearable can be removed from the band and worn on a shirt.

The Pokémon video game series has used real-world locations such as the Hokkaido and Kanto regions of Japan, New York, and Paris as inspiration for the fantasy settings in which its games take place. This is the first time the popular game franchise has used the real world as its setting.

While the game is free to play, Nintendo will be rolling out a $35 wearable that enables play without looking at a smartphone, such as for joggers on their morning run.